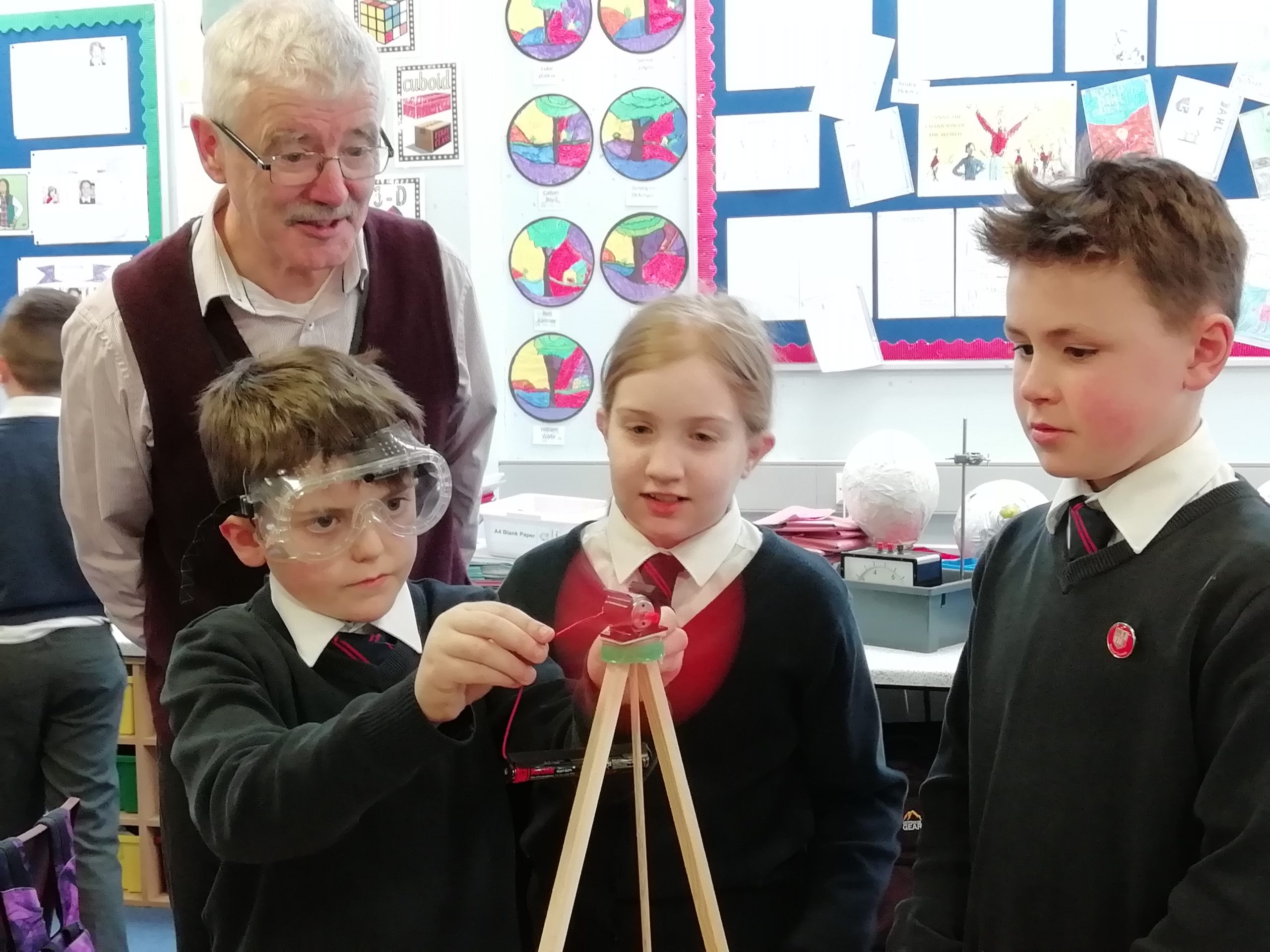 Classroom activities linked to the curriculum: Energy from the wind

These activities are designed to introduce Key Stage 2 pupils to the science and technology behind renewable energy in general and, in particular, the modern wind turbines we see on local hills.

Energy in the Past: Local historical references include the windmill at Ballycopeland and watermills (eg Wellbrook), William Traill’s Giant’s Causeway tram, and seventh century tidal energy at Nendrum Abbey. Also references to the development of industry since about 1760 with associated increased fuel use and Faraday’s experiments on electromagnetic induction leading to development of widespread electricity use.

Energy now: Something has energy if it can make itself or something else move. So, energy is all around us, in the transport we use, in the machinery that drives our manufacturing, in the food we eat, and in the nerve signals that control body movements and determine our thoughts and memories.

Every living thing, and many non-living things – including us, and most of the world around us – need energy. The sun is the ultimate source of energy allowing plants to grow. Plants feed animals, and the fossil fuels – coal, oil and gas – were formed from decaying animals and plants over many, many years. We eat food; we burn petrol or diesel in car engines; we burn coal, oil or gas at home for cooking and heating and also in our power stations to generate electricity to power all our appliances.

Unfortunately releasing energy from coal, oil and gas results in the production of carbon dioxide as a by-product, and this has helped lead to global warming (increasing the temperature of the Earth’s atmosphere). This has resulted in melting polar ice, rising sea levels, and the more extreme weather currently being experienced worldwide. We need non-polluting energy sources such as wind and solar power. Also, the fossil fuel sources of energy will run out, so we need new sources that don’t run out – renewable sources. Most nations are committed to stopping using fossil fuels by 2050, to limit global warming.

Northern Ireland has already started its journey towards greater use of renewables (see local examples and more information in the appendix). However, we need to do much more.

Energy in the Future: Most renewable sources still use rotation of a coil in a magnetic field to generate electricity (as Faraday demonstrated). This may be from:
- wind and hydro (river and tidal) use flowing water to initiate rotation,
- sea wave energy (up and down motion) can be converted to rotation,
- steam turbines: heat energy from burning renewable fuels can convert water to steam. Steam flows through the turbine to create rotation.

Oil, gas, and coal will eventually be replaced by other fuels, potentially including hydrogen. There may also be development in nuclear fission, and nuclear fusion.
(see more information on renewables, local examples, data and their pros and cons in the appendix)

Assumed prior understanding
1. Pupils should already be familiar, or become familiar, with the idea that energy is what can make things move, and can come in many interconvertible forms, for example: motion/kinetic (moving air or water), gravitational potential (from position or height), electrical, magnetic, heat, light and sound.
2. They should be familiar, or become familiar, with simple electric circuits (cell (or battery) and bulb/buzzer/motor), and the idea that ‘electric current’ flows from the cell through the bulb, converting electrical energy to light, sound or kinetic energy.
3. They should know that wind carries energy which can be converted usefully.
4. They should be aware of the range of energy sources for conversion to electrical energy.

Objectives:
Pupils should understand, and be able to use appropriately, the words and phrases in bold below.
Pupils should understand that:
- Moving a conducting wire in a magnetic field (or near a magnet), or moving a magnet near a conducting wire causes electric current to flow in the wire. A current is generated in the wire. (This is called electromagnetic induction).
- In an electric generator or turbine, a magnet is rotated inside a coil of wire (or a coil of wire is rotated in a magnetic field). This generates (induces) alternating electric current in the coil. (In an electric motor this action is reversed: electric current is converted to rotational motion).
- The rotation in a turbine can be provided by the movement of wind, water, or steam from water boiled by burning gas, coal, oil, or by nuclear fuel.

We are learning to:
- find out more about wind turbines and renewable energy,
- use equipment, materials and resources safely and efficiently,
- work cooperatively in groups, and
- plan, do and review our work.

Print
ENERGY4ALL
CO-OPS
Below are links to some of the other Co-ops in the Energy4all family:

Manage Cookie Consent
To provide the best experiences, we use technologies like cookies to store and/or access device information. Consenting to these technologies will allow us to process data such as browsing behavior or unique IDs on this site. Not consenting or withdrawing consent, may adversely affect certain features and functions.
Manage options Manage services Manage vendors Read more about these purposes
View preferences
{title} {title} {title}