Power from the wind in Northern Ireland

Capture of the energy in wind to generate electricity has been one of the major success stories in helping to reduce harmful greenhouse gas emissions in Northern Ireland.

Wind power has accounted for most of the increase in renewable energy capacity in Northern Ireland over the last 10 years (from 0.3GW in 2010 to about 1.65GW in 2019). Largely as a result of the Northern Ireland Renewables Obligation support scheme introduced in 2005, the electricity generated from renewable sources rose from 3% in 2005 to almost 45% in 2019. It is still increasing, though more slowly, at the time of writing in autumn 2021.

Wind turbines vary in size from small to large and have been installed on land (onshore wind) or at sea (offshore wind). The size of the turbine, particularly the length of the blades affects the amount of electricity which can be generated. The angle that the blade is set at also influences wind capture and efficiency. Single installations on farmland are commonly seen across NI and collections of turbines in wind farms are also common.

Drumlin Wind Energy Co-op was established in 2012 when a share offer document was launched to invite citizens to invest in an innovative project to build community owned wind turbines. In total 6 turbines, each capable of producing 250kW of electricity, were installed and almost 1000 people invested.  An elected Board of Directors manages the operation and maintenance of the turbines and oversees the distribution of profits among the stakeholders – including the six landowners, co-operative members and the local community.  As the first community energy Co-op in NI, Drumlin celebrates the numerous benefits – economic, environmental, social and educational – that it exemplifies in this region.

Drumlin’s  contribution to renewable generation in Northern Ireland is very small in terms of quantity of electricity.  The majority of wind generation is provided by large scale wind farms owned by developers. About 700 small scale (100kW to 250kW) turbines exist and are owned by local farmers, individuals or businesses. Drumlin Co-op is unique in that its 6 turbines are community owned and the project produces widespread local benefits including the community benefit fund which supports BREESI as well as other initiatives.

Some Benefits of Wind Power

Some disadvantages of Wind Power

Since operation began, the Drumlin turbines have been performing very well and generation has largely been as anticipated. 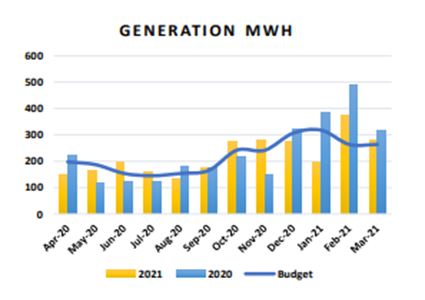 Comparison of generation between 2020 and 2021 over 5 months

ENERGY4ALL
CO-OPS
Below are links to some of the other Co-ops in the Energy4all family:

Manage Cookie Consent
To provide the best experiences, we use technologies like cookies to store and/or access device information. Consenting to these technologies will allow us to process data such as browsing behavior or unique IDs on this site. Not consenting or withdrawing consent, may adversely affect certain features and functions.
Manage options Manage services Manage vendors Read more about these purposes
View preferences
{title} {title} {title}